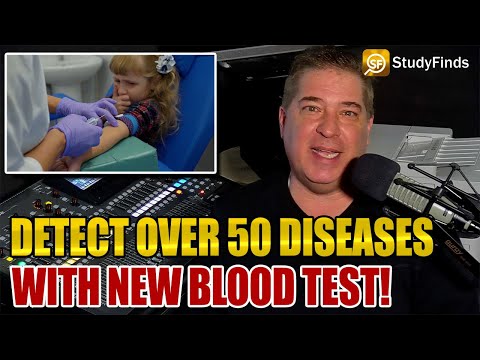 If you hate going to the doctor, you’re going to love this “game-changing” news. An international team of scientists are cutting down all the pricking and prodding in doctor visits by creating a single blood test to find over 50 genetic diseases. They expect the revolutionary blood test to cut the time of diagnosis for neurological and muscular disorders from decades to days.

Many genetic diseases such as epilepsy are rare and do not show up later in your adult life. Some conditions are from unusually long DNA sequences in genes known as short tandem repeats (STR). Doctors have found people with STR in their genes hard to diagnose because of the complex symptoms it creates, the repetitive sequences, and limited genetic testing methods.

“This new test will completely revolutionize how we diagnose these diseases. We can now test for all the disorders at once with a single DNA test and give a clear genetic diagnosis,” explains study co-author Kishore Kumar, a researcher at the Concord Hospital in Sydney, in a statement. “It will help patients avoid years of unnecessary muscle or nerve biopsies for diseases they don’t have, or risky treatments that suppress their immune system.”

Some conditions found with the blood test include Huntington’s disease, fragile X syndrome, motor neuron disease, among others.

The blood test still has more trials to go through. Still, if it continues to be effective, patients will have access to earlier therapies, undergo fewer surgical procedures, and lower the number of drug side effects. Compared to other diagnostic tests, the new technique is quicker, cheaper, and more accurate.

The blood test should be available in 2 to 5 years if all goes well.

One study participant, John, volunteered to take the blood test after experiencing balance problems during a ski lesson. Over the years, his symptoms worsened and made it difficult to walk without support. Despite a decade of testing, doctors could not figure out the cause of his condition. The blood test diagnosed him with a rare genetic disease called CANVAS which impacts the brain.

“It was reassuring to finally confirm my diagnosis genetically, and it’s exciting to know that, in the near future, others with these types of conditions will be able to get a diagnosis quicker than I did,” John says.

Using a single DNA sample from a blood sample, the test scans a patient’s genome using a method called Nanopore sequencing. “By unraveling the two strands of DNA and reading the repeated letter sequences – combinations of A, T, G or C – we can scan for abnormally long repeats within the patient’s genes, which are the hallmarks of disease,” explains Dr. Kumar.

The Nanopore gene sequencing device is compact, comparable to the size of a stapler. It costs about a thousand dollars which is cheaper than the current hundreds of thousands needed for current DNA sequencing tests.

“For patients like John, the new test will be a game-changer, helping to end what can often be a taxing diagnostic odyssey,” Kumar says.

The study is published in the journal Science Advances.